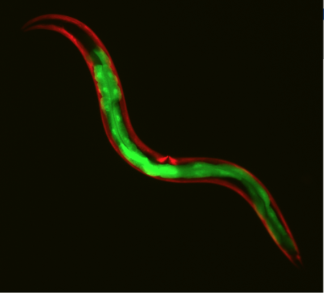 Spliced leader trans-splicing is an RNA splicing mechanism used by many eukaryotic groups (including many important human and animal parasites) to generate the 5’ ends of their mRNAs.  The mechanistic details of this process are not well understood, and we are using the model animal C. elegans to gain insight into the key molecules involved.  Better understanding of spliced leader trans-splicing has the potential to facilitate the development of new drugs to treat parasitic infections. ​
This work is funded by a BBSRC Project Grant

Conservation of operons and polycistronic processing in the Nematoda 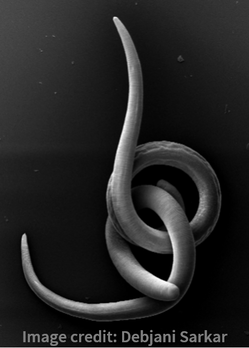 ​The organisation of multiple genes into a single transcriptional control unit, termed an operon, is a common feature of prokaryote genomes.  Although, less prevalent in eukaryotes, this gene expression strategy is found in a substantial number of unicellular and multicellular taxa.
A common feature of all eukaryotic operons is the presence of spliced leader trans-splicing.  This mechanism is an essential element in the generation of mRNAs derived from genes situated downstream of the first gene in an operon (downstream operonic genes); the spliced leader RNA carries a cap structure on its 5’-end, which allows the trans-spliced mRNAs to be recognised by the translation machinery.  Addition of the spliced leader is also thought to prevent termination of transcription following polyadenylation of the upstream mRNA.

Spliced leader trans-splicing has originated multiple times across the Eukarya. This suggests that eukaryotes have a propensity to evolve this mechanism given the appropriate selection pressures. We are carrying out forced evolution in the laboratory engineering yeast strains that express nematode spliced leader RNAs, with the goal of gaining insight into the molecular changes that occur in an organism as it acquires spliced leader trans-splicing as a gene expression strategy.